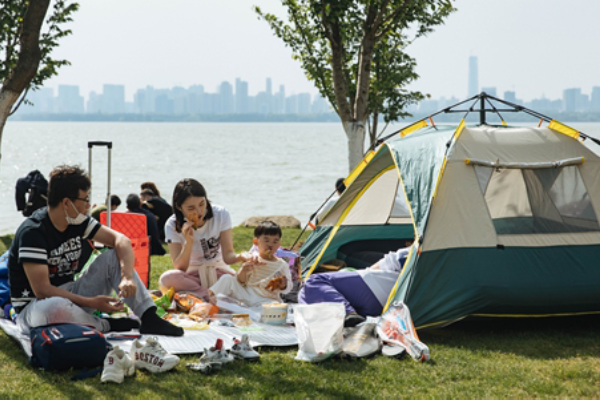 Wuhan residents enjoy camping and picnic in the spring breeze over the weekend at the city’s Donghu Lake scenic area. Photo: GT/Li Hao

The upcoming May Day holidays will help the recovery of the hotel sector in Hubei Province, especially Wuhan city, one of the largest cities in China. As of Sunday, 261 – or 60 percent – of the star-rated hotels in Hubei were ready to accept guests, following the reopening of the region hardest-hit by COVID-19.

“Now, the occupancy rate is around 10 percent, but that may change after May. Lobbies, halls and restaurants are disinfected every half hour, and customers are not allowed to eat in the hotel restaurant,” the Hilton Wuhan Riverside told the Global Times on Monday, but it declined to disclose May Day booking numbers.

Another foreign-invested hotel in Wuhan, Westin Wuhan Wuchang, told the Global Times that the occupancy rate in the past two weeks had grown compared with the beginning of this month.

“Our hotel is offering promotions to attract guests. All the hotel rooms are open. Guests can eat in the restaurant but they must sit separately,” an employee said.

On the travel booking platform Ctrip.com, a promotion for Westin Wuhan Wuchang offered discounts of up to 50 percent. The rate for a river view double-bed room is 738 yuan ($104) per night, which is 880 yuan less than the normal price.

Industry analysts said that star-rated hotels and chain hotels in Hubei are more capable of weathering the public health crisis than small ones.

“Five-star hotels cut room rates in the past two months, which squeezed the market share of four-star and three-star hotels. In that sense, small hotels have almost no space to survive,” Zheng Jiaoshou, founder of the Victoria Hotel in Foshan, South China’s Guangdong Province, and an analyst of the online travel agency industry, told the Global Times on Monday.

“At the dozens of hotels in Hubei for which I work as a consultant, room reservations for the May Day holidays are half those of the same period last year, but that’s actually good news,” said Zheng.

An employee of a domestic four-star hotel in Wuhan, who declined to be identified, told the Global Times that only 50 percent of the rooms are open as the facility doesn’t have enough employees to do the disinfection. The rooms booked for the May Day holiday so far account for about one-third of those open.